The history of the vineyards of the Santo Stefano Farm 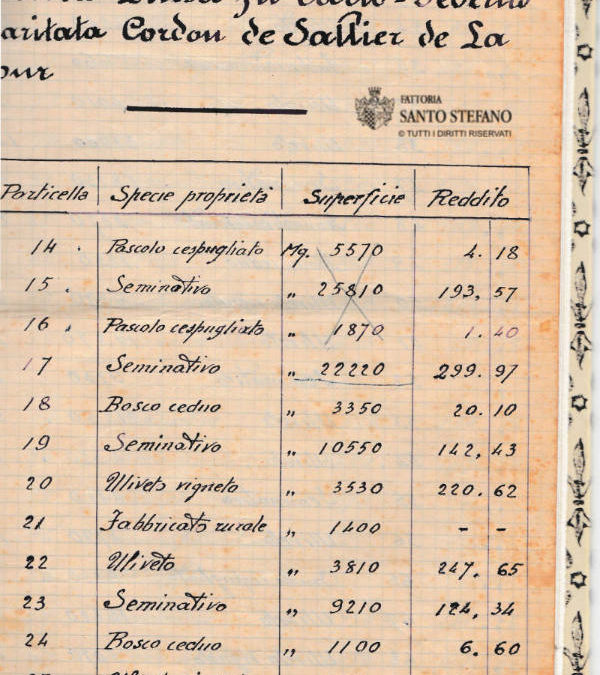 Some historical facts about the Santo Stefano Farm.

The lands around the Farm, which we lovingly and patiently safeguard, have ancient origins. Our beloved olive tree groves and vineyards, which we produce our fine wines from, span all around the property.
The name of the property itself is a tribute to the Santo Stefano Church, which is found in the Collegalle countryside.
The construction of the small Romanesque Santo Stefano Church, which has been heavily restructured, dates back to 1152 and it is even mentioned in a document from 1260. Reports of the establishment of a small village on Mount Collegalle were as early as the 11th century. This is demonstrated by several sections of cobblestone from the Roman era, which then became Via Francigena in Medieval Times, and are still present at the top of the mountain.

The toponym Collegalle comes from the Latin Callis, (which comes from the expression ad collem Calli) which then became Collegalle. The place is also called Carpignalle because hornbeams (Carpinis Vitifera) are found along the gullies. These plants aid the growth of the grapevine. The countryside around Santo Stefano has always been an important agricultural area in the Greve in Chianti area, spanning 500 hectares.

Marquise Elisabetta, known as Elsa Sallier de la Tour, skilfully ran the Santo Stefano Farm until 1963. Marquise de la Tour, born in Turin on 25/09/1891, was very passionate about agriculture and wine, probably because of her French-Savoyard origins. It was thanks to this passion of hers that the first vineyards were planted and cultivation and farming methods were modernised. She introduced new wine-making practices in the cellars and approved the construction and consecration of the private chapel of Santo Stefano, connected to the Santo Stefano Church in Carpignalle.

In 1963 the ownership of the Santo Stefano property went from the hands of the Marquise to those of Mauro Bendinelli. When purchasing the estate, Mr. Bendinelli inherited the Marquise’s love for our lands. As time has passed, Mother Nature has generously continued to give us her fruit, so much so that, in 2000 our farming business Fattoria Santo Stefano was established. Nowadays, all of Mr. Bendinelli’s children are actively involved in the running of the farm.